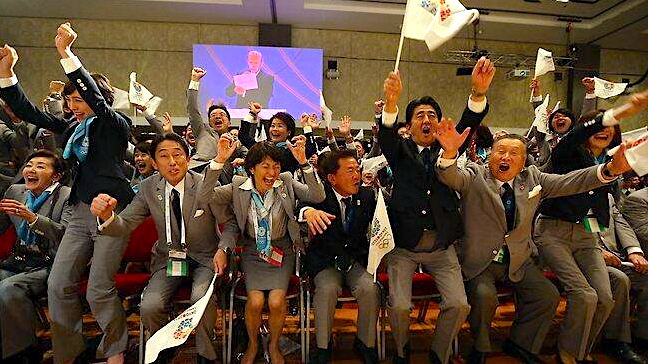 Tokyo was chosen to host the 2020 Summer Olympics on Saturday, beating Istanbul and Madrid at the International Olympic Committee’s general session in Buenos Aires.

The Japanese capital won a final round of voting by International Olympic Committee (IOC) members in Buenos Aires to beat Istanbul by 60 votes to 36. Madrid had earlier been eliminated in a first-round ballot.

The announcement was met with jubilant scenes in Japan, as Tokyo prepares to host the event for the first time since 1964.

“Congratulations to the city of Tokyo on its election as host of the 2020 Olympic Games,” said outgoing IOC President Jacques Rogge. “Tokyo presented a very strong technical bid from the outset – and it needed to in competition with two such high-caliber bids from Istanbul and Madrid.

“I have waited so many years to experience this joy. It is an honor to be picked as the host city,” said Tokyo bid chief and Japanese Olympic Committee President Tsunekazu Takeda.

Prime Minister Shinzo Abe touched on the problem in Tokyo’s final presentation and said the government would never put Tokyo in harm’s way, saying, “The situation is under control. Tokyo 2020 will offer guaranteed delivery.”

“My heart was pumping (before the announcement) and I am so happy,” said Abe. “We will respond to the expectations and support by holding a successful Olympics. I think we conveyed the message that we can hold a safe Olympics.”

Abe had stressed at the presentation that the radiation leak in Fukushima has been blocked within the port at the Fukushima Daiichi complex under constant monitoring.

The History of the Olympics

Held in honor of the father of the ancient Greek gods, Zeus, the Ancient Olympics were first recorded in 776 BC and were celebrated for more than 1,000 years, until the Emperor of Byzantium Theodosius I suppressed the Games in favor of the new Christian religion that would become the official state religion.  (Read more about the history of the Olympics here)