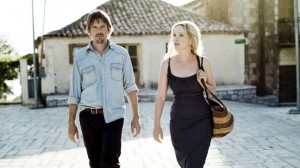 “Before Midnight,” the third film in the love story that follows Jesse and Celine, will be honored at the 17th Annual Hollywood Film Awards.

The Hollywood Screenwriters Award will be given to Julie Delpy, Ethan Hawke and Richard Linklater for their stellar screenplay that revolves around Jesse and Celine as they stroll through the ruins of Greece. The story begins nine years after their last rendezvous in “Before Sunset,” and almost two decades since their first encounter on a train bound for Vienna in “Before Sunrise.”

“Before Midnight” was released to critical and audience acclaim. The honorary award will be presented at this year’s ceremony on October 21 at the Beverly Hilton Hotel in Beverly Hills. According to the founder and executive producer of the event, Carlos de Abreu, “in the last ten years, a total of 96 Oscar® nominations and 34 Oscars® were given to the honorees of the Hollywood Film Awards.”

The Hollywood Film Awards honors cherished stars, filmmakers and up-and-coming talent, and traditionally kicks off the film awards season with the biggest stars and top industry executives in attendance.

Hopefully, this is just the beginning of many awards “Before Midnight” will bring in.