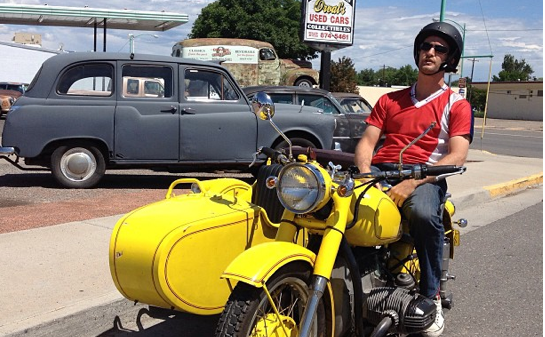 TV Host, producer, author, traveler, and all around good guy Leon Logothetis is on a new journey for charity, and he’s relying solely on the kindness of strangers.

The Kindness ONE Campaign is a mission to prove that kindness is the “real fuel that drives humanity.” Logothetis began the first leg of his trip at the Hollywood sign, and he’ll head around the world in a vintage motorcycle with a sidecar. He’s traveling with no gas, no food, no money and nowhere to stay, and plans to get by only through the help of others.

So far, his stops have included Las Vegas, New York, Chicago, Nebraska, Colorado, and he is now en route to Spain. The trip benefits the Make-A-Wish foundation, which grants the wishes of children with life-threatening medical conditions in nearly 50 countries outside the United States.

An Indiegogo page has also been set-up, and people can contribute to Logothetis’ charitable journey at various levels – from $10 (a tag and tweet from Logothetis during the journey) to $5000 (which includes numerous perks such as an Executive Producer credit on the trip’s documentary). The final stop is a return to the Hollywood sign in a few months, where Leon hopes that the “world will be a kinder place” by then.

To get involved with the campaign, visit: indiegogo.com/projects/kindness-one-and-make-a-wish-international
For more information on Kindness ONE, and to see a virtual map of Leon’s current location: kindnessone.com
And, to follow Leon’s journey as he travels around the world, check him out on Twitter: @LeonLogothetis