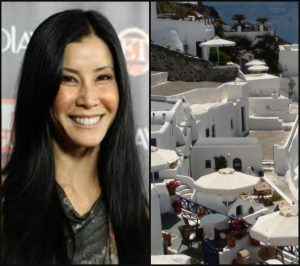 A field correspondent for “The Oprah Winfrey Show” and contributor to ABC News’ “Nightline” and National Geographic’s “Explorer,” Lisa Ling has reported from dozens of countries, so she knows what she’s talking about when it comes to some of the best places to visit in the world.

In a recent interview with the Chicago Tribune, the former “The View” co-host provided a few vacation recommendations, and when asked about the most romantic destination in the world, the well-traveled journalist said “Santorini, Greece.”

The current host and executive producer of “Our America with Lisa Ling” on the Oprah Winfrey Network (OWN) continued, “The city of Oia is the most magnificently romantic place I’ve ever been. It’s a city at the top of a steep slope and has the most unbelievable views. All of the cafes and restaurants are built into the cliff. It is romance personified.”

Last year, Ling teamed up with Yahoo! and American Express Travel to shoot a video touring the beauty of Santorini, and hailed it as “one of the most stunning places on earth.” 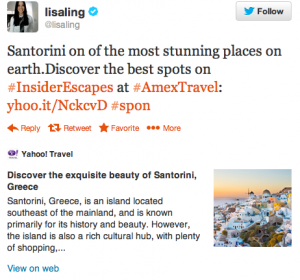 Famous for its gorgeous sunset and romantic setting, Santorini is popular with tourists and travel experts alike, with thousands of visitors heading to the island every summer.