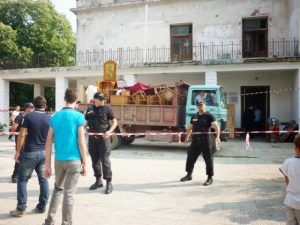 Tension still prevails in Përmet in Albania, where hundreds of Orthodox residents of the town came into conflict with the forces of private police that were lined up outside the Church of Virgin Mary.

The church was taken over in a violent way some days before following the orders of the municipal authorities.

Photos of the scene showed crews building a brick wall at the entrance to prevent people from using the church as well as using sheet metal around columns.

The municipality sent private police to the church in order to implement a Supreme Court decision concerning the returning of the church building to the municipal authorities who maintain that the place belongs to them and that it is a cultural center.

However, according to the Orthodox Church of Albania, and as it is widely known, the building was confiscated by the Communist regime in 1968 an was turned a cultural center as were hundreds of other churches in the country.

Archbishop Anastasios of Tirana, Durrës and All Albania, talking about the incidents of Aug. 16, spoke of “a very sad incident” and reminded, among others, the agreement of 2010 between the government and the religious communities in the country for returning to them all the religious institutions.