Santorini Left in The Dark Again 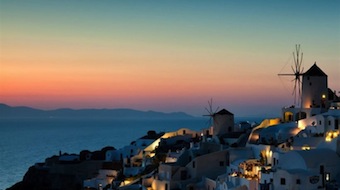 The Greek island of Santorini, one of the most popular tourist destinations in Greece, was plunged into darkness once again at 9:00 p.m. on August 15, leaving the island with no electricity at the worst moment possible, when the island is full of tourists.
Residents, shop owners and tourists feel despair and their discontent against the Public Power Corporation (PPC) is intense.
“We are financially destroyed,” residents said as they are forced to close their stores and can do nothing about it. They do not know when their stores will re-open as the power cuts are continuous.
The new black out on the night of Aug. 15, occurred when a capacitor popped at the power station, as reported in the Greek newspaper Ta Nea. According to the Greek newspaper To Ethnos, the first information from the PPC reported that the problem occurred by a sudden voltage surge  in a capacitor.
There was no explosion this time but, according to early information by vice-Mayor Giannis Argyros, a fire of small extent broke out in some cables. The gradual restoration of electricity began a little after 9:30 p.m.
The Mayor of Santorini, Anastasios Zorzos, asked the prosecutor’s intervention, denounced the overthrow of the initial programming by the PPC to repair the damage, and asked for a government representative to visit Santorini. He announced that he will file a complaint against those  responsible.
“I do not care what the problem this time was. A minister should come here to coordinate the situation,” the Mayor stated, adding that the ferry-boat Melina, which transported generators with a capacity of 5 MW from Rhodes, was expected to arrive at eight in the morning of Aug. 15, but finally arrived at 4:30 in the afternoon. The Navy Ship Chios also arrived late.
The consecutive blackouts have outraged residents and shop owners and have caused a severe blow to the island’s tourism. For this reason, under the Greek Prime Minister’s command, the Interior Minister, Giannis Michelakis, and the Tourism Minister, Olga Kefalogianni, will go to Santorini on Aug. 16.
The two ministers will attend a meeting that will be held at the municipality, concerning how the electricity problem will be dealt with, as well as its negative effects.