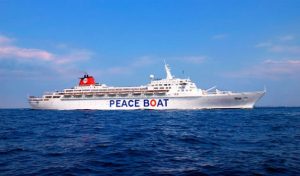 Within the framework of a nuclear weapons awareness effort, the Peace Boat docked in Limassol on August 15.
According to the Limassol Municipality announcement, the boat would remain for the whole day while a passengers’ delegation went to discuss nuclear disarmament with the city’s mayor.
According to the Cyprus Mail, the ship was welcomed by environmentalist  representatives at an official port ceremony, which was also attended by the Environment Commissioner, Ioanna Panayiotou.
The Green Party deputy Giorgos Perdikis was due to meet the delegation in Nicosia for a visit to the Ledra Palace checkpoint.
Hundreds of passengers from 60 countries are currently aboard the ship, including eight survivors from the World War II nuclear bombings in Japan. The Japanese NGO, Peace Boat, started out in 1983.
The organization supports among others the protection of the environment, elimination of poverty and anti-discrimination. The Green Party supported the Peace Boat’s visit to Cyprus.
Having visited 100 ports since its inception, the Peace Boat arrived from Egypt on its way to the port of Piraeus, near Athens. After several more planned stops in the Mediterranean, the Peace Boat will cross the Atlantic to South America before returning home to Japan.