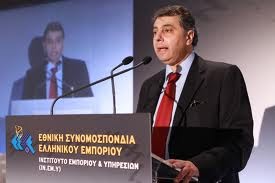 With the government set to transfer or fire 40,000 public workers and employee rights being decimated during a crushing economic crisis, the President of the National Confederation of Greek Commerce (ESEE), Vassilis Korkidis said businesses want a 13% wage cut, affecting about 500,000 retail workers.
That would lower their monthly wage before taxes from 863 to 751 euros, or from $1,151 to $1,002. Greece’s international lenders, the Troika of the European Union-International Monetary Fund-European Central Bank (EU-IMF-ECB) have insisted that workers have their pay cut to make Greece competitive with other countries, including it neighbors, who receive far less in wages.
Korkidis told the newspaper Imerisia newspaper that the dire market conditions necessitate further wage cuts. With collective labor agreements expiring on Oct. 31, he said individual contracts will be offered to workers who are likely to have further pay cuts. The government is phasing out workers rights and leaving it to bosses to set pay scales apart from the minimum wage, which is 683,76 per month before taxes, or about $912.
The General Confederation of Professionals, Craftsmen and Merchants (GSEVEE) will also seek out a similar “logical wage cut” with the Private Sector Employee Federation, its officials said.
The workers union said it would resist, although three years of protests, strikes and riots have done nothing to stop austerity measures and private sector wage cuts which have led to a record 27.6 unemployment rate and more than 110,000 businesses closing.
“It is not possible to make such a proposal without any dialogue,” the union said, warning that further wage cuts will lead to further recession and bankruptcies. Union officials also said that Korkidis had initially promised to initiate dialog between employers and employees after the collective labor agreement expires in October.