TechNews
GreekReporter.com Canada Brilliant Celebration of the Assumption of Mary in Montreal

Brilliant Celebration of the Assumption of Mary in Montreal 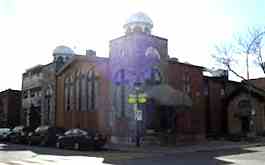 On August 14, thousands of Greeks flooded the Koimisis Tis Theotokou Greek Orthodox Church (Panagitsa), on Saint Roch Street in Park Extension, Montreal, in order to celebrate the image of the Assumption of the Virgin Mary during the episcopal vesper service, which was officiated by the Metropolitan Sotirios of Canada, accompanied by the church’s head Nikolaos Papageorgiou and the Greek Orthodox clergy of Montreal.

As AMNA reported, the faithful participated reverently in the Litany of the icon of the Virgin Mary in a solemn atmosphere.

The Metropolitan of Canada conveyed Ecumenical Patriarch Bartholomew’s blessings to the faithful, who had visited the Koimisis Tis Theotokou church and the Evangellismos Tis Theotokou church in the region of the Park extension, keeping alive the memories from the people of Montreal. He also noted that all eyes are on Greece’s problems and difficulties.