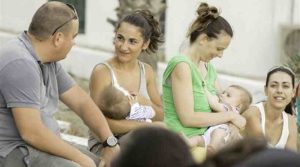 “Breastfeeding is health”. With this slogan young mothers with the support of the PanHellenic Network of Voluntary Groups of Support of Breastfeeding and Motherhood and the IBFAN Greece, held a public breastfeeding in Santorini on August 6.
The young mothers were triggered by an incident which occurred a few days ago. A woman went outside a restaurant at Fira to breastfeed her baby and was forced to leave by the people in charge of the restaurant. The woman published the incident, triggering a chain reaction.
Young mothers decided to protest with public breastfeeding, to communicate an important message, “Breastfeeding is not a sight, it is not an aesthetic deviation, it does not violate any ethical rule. Every society has the duty to encourage it, not to hide it behind folding screens or closed doors.”
The action was made in the framework of the World Breastfeeding Week (1-7 August).