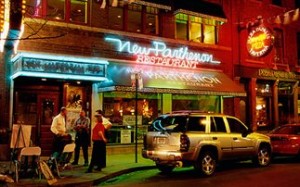 While the city of Detroit has gone bankrupt, the community of businesses in the noted Greektown area are doing very well indeed.

The newspaper Ethnos reported that Giannis Dionysopoulos, a restaurant owner and Vice President of the Greektown Preservation Society, which aims at preserving the Greek presence in the region,said  “business is doing better than ever. Greek businessmen are expanding. New stores are opening. A great development is observed.”

Greektown, consists of 12 restaurants of Greek ownership, seven of which serve Greek cuisine, while two years ago there were just three Greek restaurants in the region and many wanted to limit their Greek identity.

This is when Greektown Preservation Society was created, which organized events of Greek character and bombarded television and newspapers with publicity, drawing customers by the droves.

The fact that Detroit declares bankruptcy does not leave Greeks of Motown unaffected, who believe, however, that this could be a new beginning for the historical city.

“Until the current moment, we have not encountered any problems. Of course, there is concern, but at the same time there is the feeling that bankruptcy will bring something good for the city. It will give us the possibility to start from the beginning,” Dionysopoulos stated.