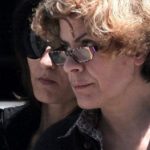 Struggling to keep her composure, Areti Tsochatzopoulos, testifying in the money laundering case of her father Akis, a former defense minister, said she knew nothing about anything to do with her father’s dealings.
She is on trial with 16 other defendants in the case who are charged with helping him launder money received in kickbacks from defense contracts, but she denied any knowledge of what her father allegedly did.
The prosecuting attorney questioned her repeatedly about whether she helped her father hide money by making real estate purchases. Her attorney objected to the line of questioning, telling the prosecutor: “Are you asking her to become her father’s accuser? Have you not read ‘Antigone’?”
Tsochatzopoulou went on to describe how the allegations against her family have affected her personal life, saying that her children were being badgered at school. “This story has taken away my good name, something I have worked all my life to uphold,” she told the court.