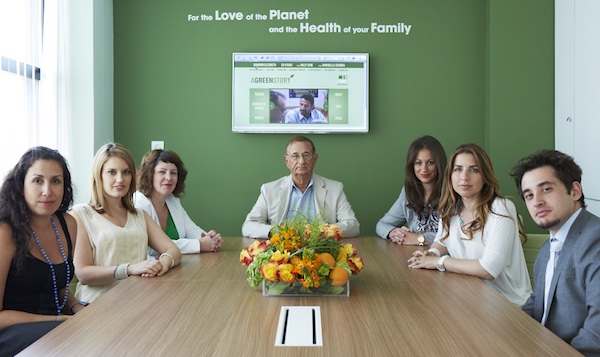 The Greek economic crisis did not scare away the owner and founder of Earth Friendly Products, Van Vlahakis, who arrived in Athens to open the company’s first office in Europe on July 15th.
On the contrary, the economic hardships that the country and its citizens face was a decisive factor for the company to come to Greece. Earth Friendly products saw this crisis as an opportunity to tap into the European market and at the same time offer well-paying jobs to Greeks.
“It’s a new life over here that we are trying to bring in with our American technology transported in Greece and building a business that will be good for the Greeks and also for the whole Europe and the middle East because they will be able to get high-quality green products at a great price,” said Vlahakis, who was born in Crete.
“We were successful in America because we are trying to do good things for the people and for the environment,” he added. “We decided about a year ago that as Greek-Americans the most important thing to do to help Greece was to create jobs, green jobs, and we really urge other businesses to do the same,” said Vice President of Earth Friendly Products Kelly Vlahakis-Hanks. It wasn’t easy as despite his roots, Vlahakis ran into the usual obstacles of Greek bureaucracy, inefficiency and incompetence.
Watch our interview and see the new offices of Earth Friendly Products in Greece:

Earth friendly Products Hellas was formally established on June 25, 2013 and now have opened their offices to the public in Greece.
Earth Friendly Products is the manufacturer of ECOS, the World’s top-selling green laundry detergent and 150 other cleaning products using only plant-based, all-natural ingredients and already has five plants in the U.S.A. It also plans to open a factory in Greece within the next two years to manufacture their products locally.
The opening of the EFP Hellas office coincided with the premiere of “A Green Story,” the movie based on the life of the company’s CEO.