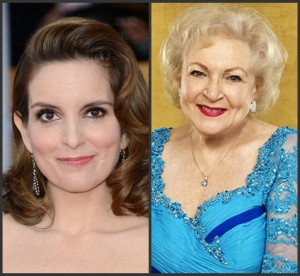 The 65th Annual Primetime Emmy Awards nominations are out, and a few Greek-Americans have made the list.

Tina Fey scored an Outstanding Lead Actress in a Comedy Series nomination for her role as Liz Lemon on “30 Rock.” The show ended its run this year, and while Fey is no stranger to getting acknowledged for her work on the comedy series — both in front of and behind the camera (she’s also the show’s creator) — she may just be looking at another win as a final bow to her performance on “30 Rock.” The show was also nominated for Outstanding Comedy Series.

Betty White received a nomination for a show she executive produced, “Off Their Rockers.” While the hidden-camera reality series was recently cancelled after just two seasons, the 91-year-old actress can still smile about her nod in the Outstanding Host for a Reality or Reality-Competition Program category. Since it will no longer air on NBC, and White is a favorite among audiences and industry folk alike, she could potentially walk away with the award this year.

And, Zach Galifianakis was nominated in the Outstanding Special Class – Short-Format Live-Action Entertainment Programs category for his work as executive producer on “Between Two Ferns,” which he also hosts. He shares the nomination with executive producers Mike Farah, Scott Aukerman and BJ Porter, and producers Anna Wenger and Betsey Koch.

The Emmy Awards air on CBS Sunday, September 22 at 8pm/7pm Central. Check out a full list of nominees here.