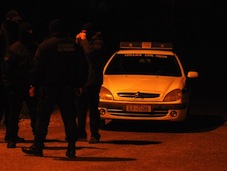 On the morning of July 17, policemen of the DIAS unit were attacked when they attempted to stop a car for inspection in the Ambelokipi district, on a street behind the Police Headquarters in Athens.
According to primary information, the unknown car passengers came out of the car and shot at the policemen with Kalashnikov at least eight times.
The four policemen of the DIAS unit fired back. The bullets hit cars and buildings at the point of the shootout. Later, the crime scene police team collected the casings. There were no injuries and the police immediately organized a large operation to detect the perpetrators.
According to information, the perpetrators’ car was found a little later in a nearby street, while investigations are in progress. According to new information, there have been four arrests.