Shipwrecked Migrants to Be Hosted in School Gym 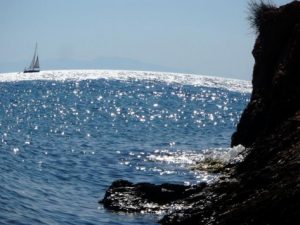 A total of 130 immigrants, who were on a sailing boat that sent out an SOS signal when it took on water near Koufonissi off Ierapetra on the Greek island of Crete, will be put in an-indoor school gym in Ierapetra.
As Ierapetra Mayor, Sifis Anastasakis reported, according to the current information, the boat transporting the 130 immigrants has sunk. All of the immigrants have boarded a boat, which has Malta as its destination, from where they will be transferred with the Coast Guard’s boats to Ierapetra beach and from there to the indoor gym with public buses.
After a meeting in the town hall, an inspection has been conducted in the indoor gym of the school group of the town, with the participation of the competent services and the harbor master, and it was decided that the place is suitable to meet the needs to temporarily house the immigrants.
An effort has began to transfer mattresses provided by the municipality to host the 130 people. The role of Volunteers Samaritans of the Red Cross in Ierapetra is of decisive importance.
“We contacted all the competent bodies, as the municipality does not play the dominant responsibility role in such cases,” the mayor said. He added, “We are trying to get prepared despite the fact that today it is a strike and there is no personnel to transfer all that is needed. The place was deemed appropriate and we continue.”
Anastasakis reported that he is in contact with the Samaritans, who have experience and material such as blankets and sheets, and are waiting for the immigrants’ arrival in order to transfer them to the gym.
“Being a municipal authority, we are trying to provide help to our fellowmen, who are experiencing difficulties and I believe that society, which has expressed its sensitivity in the past, will do so in the present case,” Mayor Anastasakis said.
He concluded, “I point out that the timely and effective function of the state apparatus, which has the responsibility, is demanded so that retractions will be avoided.”