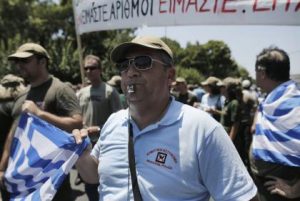 The Greek government has identified 4,200 workers, mostly teachers, school janitors, crossing guards and municipal police officers who will be the first to be fired if other positions can’t be found for them.
They will be put into a so-called mobility scheme in which they will get 75 percent of their already reduced pay for up to eight months and then either put into other jobs or let go, a condition imposed by international lenders so that Greece can keep receiving rescue aid.
Eurozone finance ministers this week approved a staggered set of installments that are set to total 8.6 billion euros ($10.46 billion) over the coming months to prop up the Greek economy, which has been on life support for three years, burdened by a crushing debt created by generations of PASOK Socialist and New Democracy Conservative administrations hiring hundreds of thousands of needless workers in return for votes.
The two parties are now in an uneasy power-sharing government with a slim majority in Parliament, needing each other more than ever as social unrest is building against the austerity measures that Prime Minister Antonis Samaras, the New Democracy leader, said he wouldn’t impose again.
Municipal workers were on strike for a second day on July 9, angry they could soon be out of work and join the 1.3 million private sector workers who lost their positions during a time when the government was implementing pay cuts, tax hikes and slashed pensions.
New Administrative Reform Minister Kyriakos Mitsotakis made the announcement of the first layoffs and said he would set an example by including 50 people in his department, mostly drivers.
He said priority will be given to people who joined the civil service after taking entrance exams (ASEP) rather than those who entered via “the back door,” code for being appointed politically and that he would proceed with dismissals on merit alone and not allow political interference.
The Eurozone agreed to release 3 billion euros ($3.86 billion) right away in a first installment, with the government hoping that would quell building social unrest.
The Troika said the government must step up the reform of tax administration and modernize the public sector. “Without agreement with the Troika on the mobility scheme, euro area finance ministers would not have approved … the latest release of aid for Greece,” Mitsotakis said. “The issue was very high on the agenda for the Troika,” he said.
A total of 12,500 civil servants, which includes the first 4,200 lined up for this month, must be placed in the program by the end of September, according to an e-mailed statement today from Mitsotakis’s Administration and E-Governance Ministry. The remaining 8,300 will come from Greece’s municipal police forces. Another 12,500 public-sector workers, coming from all ministries, must be included by the end of the year, Mitsotakis said.
GOING … GOING ….
The mobility plan is separate from another commitment agreed to with the Troika in February 2012 to proceed with 15,000 “mandatory exits” from the public sector, the ministry said.
That will entail dismissing 4,000 people outright this year and 11,000 in 2014. Mitsotakis said the closing of state broadcaster ERT in June made up 2,000 of the 2013 dismissals and another 2,000 redundancies will be identified by the end of the year.
For every five civil servants who retire, a new one will be hired and for every dismissal, one person will be recruited for employment in departments that need boosting such as the Greek Coast Guard, which is under pressure given Greece’s large illegal immigration problem, he said.
Greek municipal workers took to the streets again in protest on July 9 and Thessaloniki Mayor Yiannis Boutaris said he would resign if the firings go ahead because he was never consulted.
Up to 3,000 striking municipal workers marched through the streets of central Athens in their second demonstration in as many days to voice their objections to the civil servants’ reduction scheme.