Patriarch of Alexandria: Pray For All 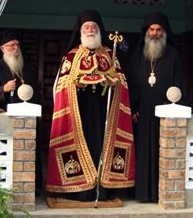 In an exclusive statement to Real.gr, the Patriarch of Alexandria, Theodore, expressed his anxiety about the difficult times Egypt is experiencing, while at the same time he sends everywhere a message for the future of the Orthodox Church and of the Greeks of Egypt.

Patriarch Theodore, immediately after the Egyptian Army communique ousted President Mohammed Morsi, in a written statement called for unity within the Egyptian society.

At the same time he highlighted the iron will of the Patriarchate of Alexandria to remain a beacon of Orthodoxy in Egypt, as it has always been during its long history, while he asked all Greeks to be mentally present by the side of the Orthodox Church and by the Greeks of Egypt.