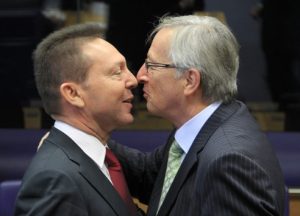 Following revelations of Greeks with secret bank accounts in Switzerland and Lichtenstein that still haven’t been checked for possible tax cheats, Greek Finance Minister Yannis Stournaras said he wants similar information from Luxembourg, whose Prime Minister, Jean-Claude Juncker, was head of the Eurozone, one of Greece’s international lenders.
Stournaras officially submitted a request, with a letter he delivered in person to his counterpart Luc Frieden in Luxembourg during their meeting at the last Eurogroup gathering on June 17, so that data about Greek taxpayers that have money abroad will be sent to Athens.
The deposits of Greeks in Luxembourg are estimated by bank executives to be approximately €600-800 million. Stournaras didn’t say what he would do with it if he gets it as he hasn’t acted on the so-called Lagarde List either of 2,062 Greeks with $1.95 billion in the Geneva branch of HSBC.
Stournaras scrambled to ask for the data after Juncker said no one in Greece was looking for it even though he, unlike Swiss authorities who aren’t cooperating, was willing to provide it.  Finance Minister officials estimated that the list of names and companies, the Juncker List, is expected to be delivered to Greek authorities by the beginning of September.
“The Greek government has never asked Luxembourg to give it the list including the Greek depositors, because it did not know the list’s existence and because the willingness to grant data had not been expressed in public,” Stournaras told the newspaper Ta Nea. He added: “From the moment that this was done, the procedures begun immediately.”