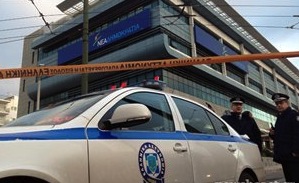 The organization Group of People’s Fighters, through its website, has taken responsibility for the terrorist attack against the offices of the Greek political party New Democracy on Jan. 14 in which perpetrators opened fire, damaging the side of the building – but said their real intention was to destroy the office with an anti-tank launcher.
One of the bullets broke the window of the Greek Prime Minister Antonis Samaras’ political office and after it ricocheted on a wall and the roof, fell on the floor.
In the 19-page proclamation, the organization describes in every detail the way that the attack was conducted, while they pointed out that their target was Samaras’ office.
According to the first estimations by the Greek police, the proclamation is considered to be authentic and they found many similarities with proclamations of the organization Revolutionary Struggle. The group referred to ongoing protests against a planned gold mine in northern Greece in Skouries, as well as to the state public broadcaster ERT’s closing down.
They said they took advantage of the element of surprise and approached their target without anyone noticing, stepped out of a stolen vehi le and aimed at the office with an anti-tank rocket.
When that didn’t fire, they tried to re-arm it but failed, they said. They said another perpetrator started shooting with a Kalashnikov against the building, because, as they mentioned in the proclamation “it would be inconceivable for us to leave without having done anything for such an important target.”