Papaconstantinou Could Get Life 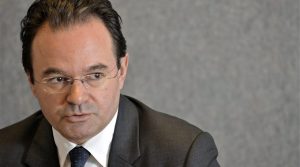 A parliamentary committee investigating former finance minister George Papaconstantionou’s handling of a list of 2,062 Greeks with $1.95 billion in secret accounts in the Geneva, Switzerland branch of HSBC bank will refer his case to the Special Court and recommend he be charged with three felonies, which carry up to life in prison if he is convicted.
The majority of the committee has almost completed the main chapters of the conclusion, which will be submitted to the plenary session of the parliament on July 4, to be voted on in the immediate days following.
Papaconstantinou got the list from then French finance minister Christine Lagarde in 2010 but never acted on it and said it disappeared. It later turned out that the names of three of his relatives, who owed 10 million euros ($13.1 million) in taxes and penalties were erased, but he denied any wrongdoing. That led to the parliamentary probe although he complained that his successor, and now current PASOK Socialist leader Evangelos Venizelos, also had the list and didn’t act on it.
Venizelos is in an alliance government with Prime Minister Antonis Samaras, the New Democracy Conservative party leader who critics said was protecting his partner from investigation into the so-called Lagarde List.
The charge sheet against Papaconstantinou is for  commission of the crime of infidelity at a felony degree, forgery and breach of duty, all serious allegations.