Big Fires in Crete and Elis 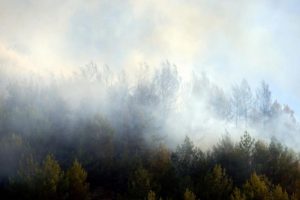 On June 19, at 13.35 a fire broke out in a greenhouse at Makrimaliana, near the beach of Kokkinos Pyrgos in the Mesara Plain, an illuvial plain in southern Crete. Winds of Beaufort force 6 were blowing in the region making the situation even worse for the  firefighters.
The fire was put under partial control shortly before 17:00. Ten greenhouses and agricultural areas in Mesara were completely burned.
One more fire broke out at 14:00 at Plakiàs, a well known seaside resort on the south coast of Crete, in the prefecture of Rethymno. The fire was put under partial control after it had burned about five acres of grassland area.
There is also one more fire in Elis, and precisely at Mesologaki, near Pyrgos. The fire broke out behind some old slaughterhouses and is burning undergrowth, trees and huts.
According to the latest information, there are more than one seats of fire and firefighters from the whole region are sent to the scene.
Meanwhile, during his effort to extinguish a large fire in Fragopidima in Elis, a firefighter was injured and taken to Pyrgos Hospital with burns.
Two Cannader threw water by air while the fire almost reached the Monastery of Fragkopidima.