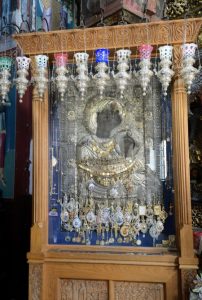 One of the most important relics of Mount Athos besides the icon of Axion Esti, is the Virgin Mary Portaitissa (meaning in Greek “Keeper of the Gate”) or the Iveron Theotokos as it is also known. Its history has made many people cry and others to believe, while it is considered one of the most precious and venerable relics for Orthodox Christians.
According to the Eastern Orthodox Church tradition, the icon was painted by Luke the Evangelist, and numerous miracles have been attributed to it over the years. Something that looks like a scar on Mary’s skin has led to various traditions explaining this, but the one most commonly held by Orthodox Christians is that the icon was stabbed by a soldier in Nicaea during the period of Byzantine iconoclasm under the Emperor Theophilus (829–842). According to tradition, when the icon was stabbed, blood miraculously flowed out of the wound. The original icon is held at the Georgian Iviron Monastery on Mount Athos and is almost fully covered with gold and silver except for the faces of Virgin Mary and Christ.
The story of the icon has it that it was once in the possession of a widow in Nicea. Not wanting the icon to be seized and destroyed by the iconoclasts, she spent all night in prayer and then cast the icon into the Mediterranean Sea (around 829 AD). The widow’s son later went to Mount Athos, where he became a monk and recounted the miracle of the bleeding wound, and how the icon had been placed in the sea. Much later, (ca. 1004) the icon was recovered from the sea by a Georgian monk named Gabriel (later canonized a saint in the Orthodox Church), who was laboring at the Iveron Monastery on Mount Athos. This occurred on Tuesday of Bright Week (Easter Week), and is commemorated annually on that day (as well as the fixed date of March 31).
The icon was taken to the main church of the monastery from which the icon got its name. The tradition goes on to say that the following day, when the monks entered the church they could not find the icon. After searching they discovered the icon hanging on the gates of the monastery. This occurrence was repeated several times, until St. Gabriel reported that he had seen a vision of the Theotokos, wherein she revealed that she did not want her icon to be guarded by the monks, but rather she intended to be their Protectress. After this, the icon was permanently installed above the monastery gates, where it remains to this day. Because of this, the icon came to be called Portaitissa or Gate-Keeper.
Since 1004, when it was found, the icon has never left Mount Athos. Legend has it that as long as the icon remains in place, the Holy Mountain will be invulnerable. Another legend has it that if the icon is lost, it will be a divine sign marking the approaching Apocalypse. Dozens of valuable offerings including amulets, champion and Olympic medals, heroes’ decorations and others adorn the miraculous icon.