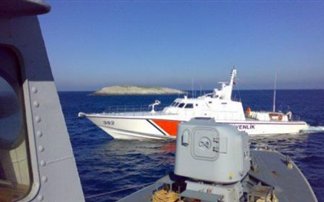 A communication on the June 5 incident with the Greek slave boat off  the island of Symi was released by the Coast Guard, but mentioned nothing about the Turkish patrol opening fire against the catamaran.
According to the Coast’s press office, aboard the vessel were 17 illegal immigrants and two Greeks traffickers who were arrested on June 6 and will be brought before the prosecutor of Rhodes.
The Turkish patrol opened fire against the catamaran without causing any injuries. The incident occurred when the Turkish patrol boat crew asked the catamaran’s captain to stop for checking off the idsland of Symi. The captain, who had taken the illegal immigrants from Datca, Turkey, ignored the Turks and continued the voyage. This led to a chase and the catamaran was caught in the west of Symi.
According to well-confirmed sources from the Ministry of Shipping, the Turkish authorities in the context of the cooperation on controlling migration flows, informed the Greek authorities of the incident and the boat stopped in Greek territorial waters and was taken to the port of Panormitis.
The Greek tourist catamaran’s captain and another person have been arrested and were to be transferred to Rhodes on the morning of June 6.