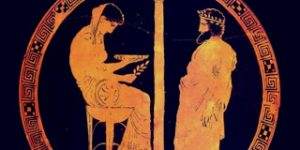 Professor Mika Kajava from the University of Helsinki revealed some of the most common questions ancient Greeks asked the oracles of their time, during the 28th Annual Meeting of the Finnish Institute in Athens, which was held last week.
The worries and questions of ancient Greeks were not very different from the ones plaguing contemporary people around the world. During his lecture, Ancient Oracles and Epigraphy, professor Kajava presented fascinating details about the things that troubled the ancient Greeks, who rushed to the oracles and asked for the guidance and blessing of the gods.
Will I be happy with the woman I’ m marrying? Will I have offspring? Will my next journey to the colonies be dangerous? To which gods should I sacrifice to stay in good health? These are some of the questions they asked the oracles, such as the famous one in Dodoni, although they did not always get a clear answer back.
“Should I stay or should I go?” that was the question asked by a slave, who wanted Zeus Naios and Dione’s guidance – the two gods worshiped at Dodoni. He wrote his question on a lead foil, as every faithful visitor would do to get the much desired answer to their problems.
Some of the visitors even tried to solve crimes and mysteries with the wisdom of the gods and their representatives on earth: “Who stole the sheet?” “Who poisoned Aristovoula?”  “Should I ask for the citizenship now?”asked a metic, while a restless husband wanted to know if the child his wife was carrying was his or not. Another common question was “To which god should I pray, in order that my business prospers?”.