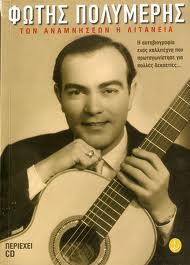 Fotis Polymeris passed away on May 28 at the age of 93. One of the most important singers and composers of light music, who performed and composed songs that have marked his era, the best of which is Asta ta mallakia sou (Let your tender hair fall).
He was born in 1920 in Patras, while his real name was Fotios Palimeris. He stood out in singing competitions since he was a little boy and composed more than 100 songs. Before the war, he had released his first album.
He worked with all the great composers and singers, as well as with Greek rebetiko artists such as Tsitsanis, Mitsakis, Papaioannou, Vamvakaris and others. He recorded more than 200 songs.
Some of his songs that were heard in Greek cinema films are, Enas xaroumenos alitis (A happy bum, film: Come to Uncle, 1950), Asta ta mallakia sou (Let your tender hair fall, film: Those who do not have to love, 1951), and Tha gurisei ki o trochos (The wheel will turn. In 2004 and wrote his autobiography.