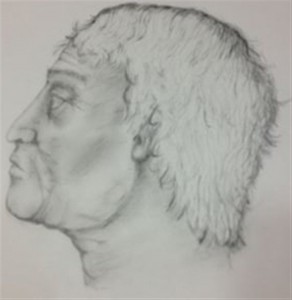 Anagnostis Agelarakis, Greek professor and Chair of Anthropology at Adelphi University in Long Island, New York, transported some of the remains of a wounded ancient Greek warrior from Greece to Long Island Jewish (LIJ) Medical Center, with the Greek Archeological Service’s permission.

He said that the warrior’s remains were discovered during an archeological excavation carried out by the Greek Archeological Service.

LIG radiologist Helise Coopersmith performed an X-ray on a bone fragment from the soldier, whose remains date back to more than 2,500 years. In the left ulna (a major bone in the forearm) a bronze arrowhead is embedded.

It was deduced that the shaft of the arrow and part of one of its three lobes had been removed by Greek field surgeons. However, the rest of the arrowhead suspected to be hooked had to be left in place, because attempts to remove it were unsuccessful or would have caused greater damage to the soldier’s wound, as reported on PRWeb news center website.

The results of the X-ray proved conclusively that the arrowhead was, in fact, hooked and had to be kept in place to preserve the tissue of the warrior’s arm. Crude attempts to remove the arrowhead, without the benefit of anesthesia, would have been extremely painful, the radiologist noted.

“This find is rarer than a diamond,” Prof. Agelarakis said. His colleagues date the grave of the wounded warrior back to the time of Philip II, father of Alexander the Great.

Prof. Agelarakis says he believes the warrior survived and lived with the embedded arrowhead, probably until the age of 58 to 62 years. He lived with constant pain, akin to very severe carpal tunnel syndrome, as well as post-traumatic syndrome effects.

Dr. Coopersmith, a musculoskeletal radiologist who specializes in reading X-rays of broken bones, said the procedure confirms that the warrior must have lived in great pain for years after sustaining his injury on the battlefield.

Professor Argie Agelaraki, in collaboration with her student Kimberly Lombardi, designed an astounding forensic facial reconstruction of the Greek warrior based on his skull.

Mykonos Streets Among the Most Beautiful in the World