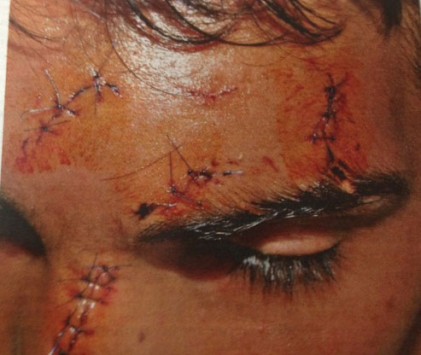 A 14-year-old Afghan youth said he was beaten in Athens and doctors at Medecins du Monde (MDM,) a health care volunteer group, said they treated him for serious injuries, including to his face.
The boy said that a group of men dressed in black clothes, assaulted him, beat him and scarred his face with a broken beer bottle after asking him where he comes from and if he carried with him any residence permit papers.
There was no evidence of who assaulted him, although some attacks have been blamed on the neo-Nazi Golden Dawn party, which it has denied.
The incident happened in Attiki Square, according to Nikitas Canakis from MDM. The youth said he was taken to a hospital but there was allegedly no report there of him being seen. He said he went to MDN, which informed UNHCR, which began a judicial procedure.
The young Afghan is currently well and under protection in a shelter, while efforts are being made to locate his family, said Canakis.
Canakis wrote in his personal Facebook account: “It could be any teenager from our children, stubborn, falling in love, wandering, dreaming, getting us angry. But no. This was different. He was an Afghan child who took of with his family to the West. Passing by from Greece. Before continuing his illegal journey to the West, he was left back as a ‘guarantee’ for the smugglers. Sometime I will tell you some of the compelling stories of modern slavery and how mostly teenagers and children are left behind as a guarantee”.

Greece will honor Haiti for being the first nation in the world to recognize Greek independence from the Ottoman Empire in 1821.
Diaspora

Designer Yannis Dimoulis uses his platform of over 23,000 followers to explore the often-comedic nuances of being Greek-American.
Greece