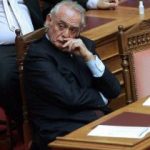 Former Defense Minister Akis Tsochatzopoulos, on trial with 18 others on a laundry list of corruption and money-laundering charges of allegedly stealing hundreds of millions of euros from defense contracts, has vowed yet again to reveal the names of other people in Greece he said are corrupt and involved in wrongdoing. He said last year he would also name names but never did.
On May 9, he told the court that he has the details of other officials who should be investigated in connection with state defense deals in an apparent bid to spread the blame in an unprecedented corruption trial.
“Everything will come out,” the 73-year-old former minister and former PASOK high-ranking official told reporters during a break from the trial when he suggested that other government officials including his successors in the Defense Ministry should face a full parliamentary investigation. “Isn’t the fact that these deals were never completed not a scandal?” the minister said. “Is it only what they say about me that is scandalous?”
Earlier, prosecution lawyers argued that the court should reject all the objections raised by the defense, including the contention that the former minister cannot be charged with money laundering as this relates to charges of bribe taking for which Tsochatzopoulos can no longer be prosecuted due to the statute of limitations.
Prosecution lawyers also told the court that the verdict to emerge from the trial of Tsochatzopoulos and his 18 co-defendants would set a precedent for the state to take similar action in other cases. This is the first prosecution of a high-profile politician in Greece in 22 years.
Tsochatzopoulos’s wife Viki Stamati, who is one of the co-defendants, was not in court after being transferred to an Athens hospital with “health problems of a psychiatric nature,” according to her lawyer. The trial is due to resume on May 14.