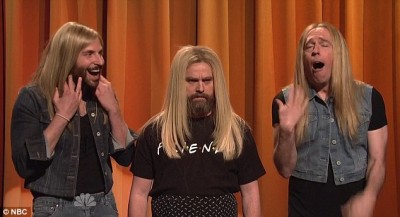 During his hosting gig at “Saturday Night Live” this past weekend, Zach Galifianakis channeled another Greek-American during one of his skits: Jennifer Aniston.

“The Hangover III” actor joined forces with the film’s co-stars, Bradley Cooper and Ed Helms, to participate in a “Jennifer Aniston Look-A-Like Competition.” The male contestants argued over which of them looked more like the stunning actress, donning blonde wigs and female clothing (Galifianakis wore a “Friends” t-shirt). Jason Sudeikis also took part as host of the contest.

Aniston has previously worked with Galifianakis, appearing on his program, “Between Two Ferns.” Before her engagement to Justin Theroux, it was rumored that she dated Jason Sudeikis and Bradley Cooper. Some viewers who commented on message boards said they were hoping to see Aniston turn up at the end of the “SNL” skit to prove who the real winner of the contest should’ve been.