GRNews
GreekReporter.comGreek NewsArchaeologyThe Famous Palace of Knossos and its History

The Famous Palace of Knossos and its History 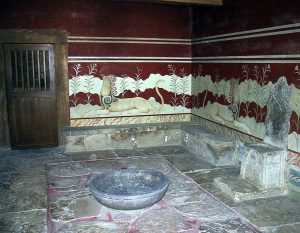 Knossos, the famous Minoan Palace lies five kilometers southeast of Heraklion, in the valley of the river Kairatos, in Crete. Ιn Greek mythology, the Palace of Knossos was the residence of the mythical King Minos, the son of Zeus and Europa. King Minos had the legendary artificer Daedalus construct a labyrinth in which to keep his son, the Minotaur, a mythical creature who was half bull and half man. The labyrinth was designed with such complexity that once someone entered he could not escape. Eventually the creature was killed by Theseus.
Knossos is the largest Bronze Age archaeological site on Crete, but sections of it were built during different historic periods such as the Neolithic and the Classical period.
Around 1700 BC, according to one theory, a powerful earthquake shook the Aegean Sea, devastating Crete. The palace of Knossos was destroyed, but the Minoan civilization was rebuilt almost immediately on top of the ruins of the past, and indeed the culture reached its pinnacle only after the devastation.
The Palace of Knossos was undoubtedly the ceremonial and political center of the Minoan civilization and culture. It appears as a maze of workrooms, living spaces, and storerooms close to a central square. An approximate graphic view of some aspects of Cretan life in the Bronze Age is provided by restorations of the palace’s indoor and outdoor murals, as well as by the decorative motifs of the pottery and the insignia on the seals.
The site was discovered in 1878 by Minos Kalokairinos. The excavations in Knossos began in 1900 A.D. by the English archaeologist Sir Arthur Evans (1851- 1941) and his team, and they continued for 35 years.
The Palace of Knossos is the monumental symbol of Minoan civilization, due to its construction, use of luxury materials, architectural plan, advanced building techniques and impressive size.
If you are fascinated by the Greek myths or interested in ancient history, then you should certainly visit the imposing Palace of Knossos