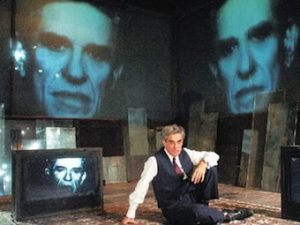 The artistic world of Greece has lost one of its greats, theater director and actor, Lefteris Vogiatzis, who passed away at the age of 68.
With his hand over his heart and deeply touched, Lefteris Vogiatzis bowed last August before a standing ovation in the theater of Epidaurus, which applauded his work and dedication after the finish of his version of Molière, Amphitryon, which was meant to be the last play he directed.
In April though he was set to come back on stage with Pinter’s Greenhouse, with a renewed cast and him interpreting the role of Route. The premiere was scheduled for the 8th of April but the performances were cancelled due his poor health.
He had said to the newspaper To Vima: “Each time a strange alliance works, there’s an interaction. The author makes you discover things about yourself and then you walk on your own footsteps, which you admitted thanks to him. The works I do, seem to have finished. I do not have a good memory.”
Vogiatzis was born in Athens in 1945. He studied English Literature at the University of Athens, attended the Reinhardt Seminar in Vienna for two years and was graduated from the K. Michailidis’ Drama School in Athens.
His first appearance in theater was in 1973, in the role of Grandma, in the Sunday Walk, directed by G. Michailidis. In 1981 he founded the Theater Company I Skini (The Stage) in cooperation with six other actors. In 1988 he founded the New Stage, where he regularly presented plays, with the participation of new actors.
In parallel, in 1989, in the beginning of his preoccupation with the ancient Greek drama, he founded the Ancient Drama Workshop, directing Antigone by Sophocles.
In 2001, he brought Sara Kane to the Greek stage for the first in the the work Cleansed, where he played Tinker. In cinema, he participated almost exclusively in movies of Nikos Panagiotopoulos, with whom he had a long friendship (The Fruit Trees of Athens, Athens-Istanbul, Beautiful People, I Dream of My Friends, The Woman who Dreamed, Varietes, and Melodrama).

Growing up Greek-American you are privy to a unique childhood, filled with some pretty strange customs (strange to those who are not Greek, anyway).
Greek Food

The ''Ouzo'' restaurant is the best choice for those who want to experience the Greek and Mediterranean cuisine in Santa Marta, Colombia
Diplomacy