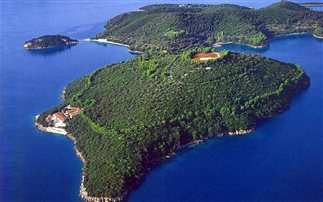 A huge operation for the removal by the new Russian owners of what the Onassis family left on the island of Skorpios is underway, with the business tycoon Dmitry Rybolovlev and his daughter ordering the removal and disposal of many objects.
According to Proto Thema, the island’s dump was filled with scrap metal, and items used by Aristotle Onassis and his children.
Among these are the small cars used by employees to move around the island and two cruisers of Alexander and Christina Onassis. The vehicles were loaded onto trucks and transferred to a recycling factory in Larissa.
Other objects, such as paintings and valuables have also moved to England by a management company acting on behalf of Athena Onassis.
Rybolovlev and his daughter Ekaterina are expected to visit Skorpios after the holidays of Easter, along with a team of architects to oversee the plans already drawn up for the renovation of the houses on the island. According to information, the buildings will be completely renovated and new guesthouses are going to be built in order to host the friends of the new owners.