The decline in the enrollment of students in Greek schools in North America’s Hellenic communities was discussed. Ways to overcome this problem were presented in the workshop. It was suggested that an establishment of Hellenic Studies programs within North American universities should be established to prepare future instructors of the Greek language and culture.

Stella Kokolis, workshop moderator and President of the Federation of Hellenic American Teachers and the World Council of Hellenes Abroad (SAE) Education Committee for the US region, said “There is a need for an improved cooperative effort among educators. Social networking, the use of computerized education materials and the creation of electronic learning centers will enhance the learning of Modern Greek language and culture. We must be united to solidify Greek education.”

“We are honored to participate in the 2013 Hermes Expo International,” said Dr. Vasiliki Filiotis, President of Prometheus. “We believe in the strengthening, development and implementation of preschool programs where Greek language and culture is taught through play, song, reading and writing. St. Irene Chrysovalantou School has an effective Greek program highly rated in Astoria, New York. Greek educators and supporters of Greek language and culture are being honored at the 22nd Anniversary Hermes Expo Dinner Awards gala.”

Paul Kotrotsios, founder and president of Hermes Expo International, said “Congratulations to the Federation of Hellenic Teachers in the USA for honoring a group of educators and outstanding Greek School graduates at the 22nd Hermes Expo. They have distinguished themselves in their profession. Their devotion to the Hellenic principles and ideals is exceptional. They are passing the torch of Hellenism to our next generation. We express our appreciation to the rare work of Mrs. Stella Kokolis and her Board and President Vasiliki Filiotis and the Board of Prometheus.”

Honoree Helen Pylarinos Fotiou is the founder of the Alumni Organization of the Graduate Teachers of St. Basil’s Academy and Hellenic College. Her education career began in 1973. Her greatest joy is to meet former students. Her son, Konstantinos C. Fotiou, who can be reached at fotiouk@yahoo.com, creates medical websites. 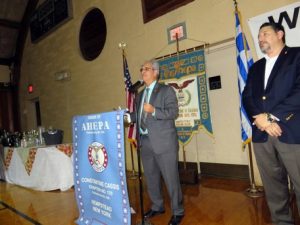