For Some, Greece's Junta Lives On 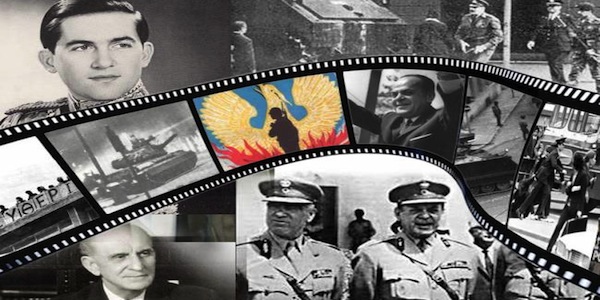 On the morning of April 21, 1967, Greeks suddenly found tanks in the streets of Athens as a coup of military leaders staged a junta that became known as The Regime of The Colonels and brought seven years of dictatorship, repression, torture and grief for much of the populace, while opponents and critics were imprisoned, tortured and exiled.
To everyone’s bewilderment, the coup leaders, led by George Papadopoulos, dispatched soldiers to arrest politicians, rivals, and ordinary citizens suspected of left-wing sympathies, according to lists prepared in advance.
One of the first to be arrested was Lieutenant General Grigorios Spandidakis, Commander-in-Chief of the Greek Army. He was persuaded to join the overthrow and activated a plan to move the coup forward, supported by the United States, which wanted a bulwark against Communism.
For most Greeks it was a terrible time. But some miss those days, including many who weren’t even born when it happened, such as members of the neo-Nazi Golden Dawn party who adore the period and its leaders and try to emulate them. 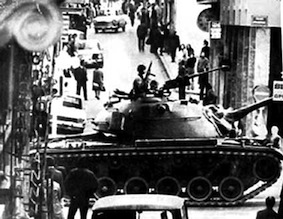 The lingering few supporters will gather on the anniversary this year at an Athens hotel to reminisce about authoritarianism at an event that will feature junta apologist Paraskevas Bolaris, from the so-called Pajamas Movement. They’ll hear speeches from Aristides Dimopoulos, a close colleague of Papadopoulos, and a greeting from Papadopoulos’s cousin Angelos Papathanou, who was director of the political office.
There will also be a presentation of the book Comparative History August 4 – April 21, where the author Manos Hatzidakis will talk about the regimes of Greece then.
As part of the political commemoration of junta an audiovisual material will be screened. Papadopoulos’ widow, Despina, has also been invited. He died in prison in 1999 at age 80, unrepentant and glad of the control he exerted on the country until a student-led rebellion in 1973 brought down the dictatorship the next year.
The 1967 coup and the following seven years of military rule were the culmination of 30 years of national division between the forces of the Left and the Right that can be traced to the time of the resistance against Axis occupation of Greece during World War II. After the liberation in 1944, Greece descended into a civil war, fought between the communist forces and the now returned government-in-exile.
DICTATORSHIP BY ANY OTHER NAME
While the remaining junta supporters glorify the era for its rigidity and lack of democracy that some craved, critics still rejoice at the downfall of the time called The Seven Years as well.
The end of the junta, however, didn’t end the division in Greece that remains deep and bitter to this day, with Leftists and Rightists, Communists and Fascists at each other’s throats ideologically, especially over austerity measures being imposed by the New Democracy Conservative-led government of Prime Minister Antonis Samaras that is opposed by the Left, which wants to keep a system of cradle-to-grave job protection for workers, hundreds of thousands of whom were hired needlessly over the years by both New Democracy and the PASOK Socialists in return for votes. 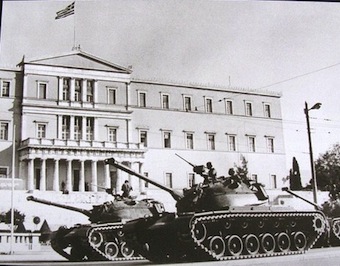 While the lessons of history fade fast and the 1967-74 period is a blurring memory for some and almost completely unknown to many young during the 21st Century age of the Internet, what happened on April 21, 1967 changed Greek history.
Just weeks before scheduled elections, a group of Right-Wing army officers led by Brigadier General Stylianos Pattakos and Colonels Papadopoulos and Nikolaos Makarezos seized power in a coup d’etat through surprise and confusion and rapid deployment.
Under the command of paratrooper Lt. Col. Kostas Aslanides, the plotters took over the Greek Defence Ministry while Pattakos gained control of communication centers, the Parliament, the Royal Palace, and — according to detailed lists — arrested more than 10,000 people.
It took only a few hours for Greece to fall into the hands of the military leaders and Papadopoulos, moving to consolidate power, suspended 11 articles of the Greek Constitution allowing the new leaders to arrest anyone for anything at any time and removing all their rights.
The Colonels special target was the Papandreou family, former Prime Minister Giorgios, and his son Andreas, later to become Premier, who fled to the roof of his house but surrendered after one the soldiers held a gun to the head of his then 14-year-old George – who became Prime Minister from 2009-11. It was reported that Gust Avrakotos, a high-ranking CIA officer in Greece who was close to the Colonels, advised them to kill Andreas Papandreou and “Shoot the motherf–ker because he’s going to come back to haunt you”. 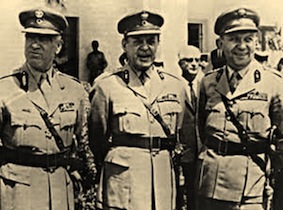 For the next seven years, the Colonels rigidly held power and swept away all would-be opposition with brutal tactics, including torture and exile. Now, with crushing austerity measures and social unrest giving rise to extremists again, there remains worry at the back of some Greeks’ heads who remember what junta that it could happen again and that the country, unless Samaras pushes a an economic recovery, and the rising popularity of Golden Dawn is stemmed, that the country is just a tank away from it happening all over again.
George Papandreou may have thought so, perhaps remembering the gun to his head, because when the country seemed on the verge of unraveling under withering protests, strikes and riots against his administration, he summarily replaced all the country’s military leaders, denying speculation that there would be another coup attempt.
Underlining almost all of Greek history is the constant division between political rivals and ideologies, mutual distrust and the curious commodity of zeelevounai, and of believing in holding down others who could supplant you.
It seems unlikely today with a different and smaller world, with alliances such as NATO, with Greece in the European Union, with trade and business replacing military power, but political divides are deep and constant in Greece and there’s also the worry that someone could come back to haunt you.