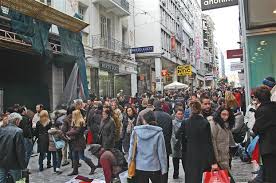 With more than 68,000 businesses closed in the last three years of a crushing economic crisis, the Greek government is planning to submit a bill that will let small stores be open on every Sunday and for department stores for seven Sundays a year.
Deputy Minister of Development, Thanasis Skordas said the openings would be optional although there are concerns it could lead to most of them being open as store owners jockey for customers and more revenue.
Greece’s international lenders are pressing for all stores to be allowed to open on Sundays but many merchants are unhappy with the change. “We don’t know any more if there’s anyone to talk responsibly, what questions we should ask and to who,” said the President of the National Confederation of Greek Commerce (ESEE) Vassilis Korkidis.
He said that, “After having abolished the Sunday holiday for stores, they seem to reject our proposal for the supposedly establishment of a development bank for SMEs, while they confirm that Mr. Horst Reichenbach has done the same at the meeting we had with him,” referring to the European Union’s task force chief among Greece’s creditors envoys that includes the so-called Troika of the EU, International Monetary Fund and European Central Bank.
“We don’t know any more what to believe about the Sundays issue, the Ministry, its ‘cycles’ or the Troika?” Korkidis said, stressing that the National Confederation of Greek Commerce has never proposed the creation of a new development bank for SMEs, but to use the existing structures of the cooperative banks.
“Honestly, we cannot understand the reason why the Ministry continues all these back and forth regarding the Sundays issue, while this proposal is already condemned by almost the entire market and society, and undermines development – which the Ministry is supposed to serve – by rejecting from the very beginning a financial proposal, which can push the market to overcome the crisis. For once more the trade falls to deaf ears,” he said.
He added: “I wonder how the Ministry imagines the market recovery? In the absence of society and entrepreneurship? Or with selective leaks by “cycles” of those responsible that stay anonymous? Unfortunately, our economic situation is getting worse day by day and some people insist in playing communication games. I think that this is the time to stop the exclusion of the institutionalized market actors from the discussions and to restore social dialogue,” he finished.