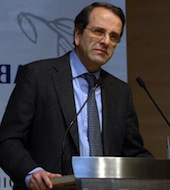 Greek Prime Minister Antonis Samaras says happy days will be back in Greece again with new bailout loans coming to help the economy turn around and said his coalition government will turn now to imposing more reforms demanded by international lenders.
Next up is completing the recapitalization of Greek banks and speeding the pace of privatization, said Samaras, who added that he can “see light at the end of the tunnel.”
Speaking at The Economist conference in Athens Samaras repeated the upbeat message he delivered after his government agreed with the Troika of the European Union-International Monetary Fund-European Central Bank (EU-IMF-ECB) troika on the details of structural reforms needed to unlock another 8.8 billion euros ($11.5 billion) of bailout funding.
“It is not just the quantitative indicators but qualitative ones such as competitiveness that show it will be daybreak soon,” he said, repeating that he believes the economy, now in a sixth year of recession, will begin to come back next year.
Samaras however said he has to convince the Troika to let Greece cut its Value Added Tax (VAT) from 23 percent to be able to compete with neighboring countries, where they range between 8 and 10 percent. The high tax is killing restaurants and small businesses and has driven down expected tax revenues as Greeks have slowed spending. Samaras repeated that the 23 percent rate for food and drink is too high.
He said he wants a flat VAT rate of 15 percent for all sectors to help revive the Greek economy and attract foreign companies to Greece. Samaras suggested that Greece could become the home of firms in the mold of Finnish mobile phone company Nokia.
Having reached an agreement with the Troika, the government is now under pressure to complete a number of tasks, especially the bank recapitalization. Finance Minister Yannis Stournaras said that Greece’s four so-called “systemic” banks could absorb all the country’s smaller lenders. “By the end of July, there will have to be a strategy for the whole of the banking sector, including the small banks,” he said.