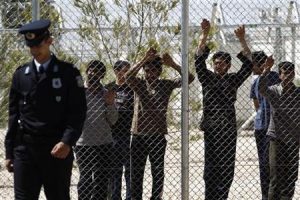 According to the United Movement Against Racism and the Fascist Threat (KEERFA), more than 2,000 immigrants held in reception centers in Greece have been on a hunger strike since April 6 to denounce the intolerable conditions.

KEERFA activists said at a press conference on April 8, “The culmination of the poor detention conditions, the mistreatment and tortures migrants have to deal with in reception centers was the three suicide attempts which happened in Amygdaleza center in northern Athens last weekend”.
KEERFA coordinator, Petros Constantinou, talked about the inhuman conditions in reception centers, adding that hunger strikes have spread across Greece, while many police departments have turned into places of abuse for immigrants and refugees.