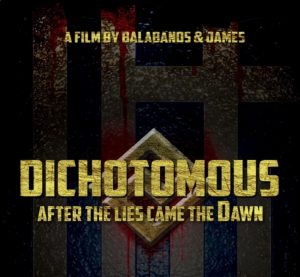 The Greek-Canadian cinematographers Filippos Balabanos and Peter James have written, directed and produced a 29-minute film called Dichotomus which focuses on the sudden and surprise rise of the neo-Nazi Golden Dawn party in Greece, a country which fought Nazis tooth-and-nail in WWII.

The premiere was set for a Montreal cinema on April 6, with part of the earnings will be offered to the project Hope for Greece that collects financial aid for the country.

The film follows two strangers, Nick Dysmas (Peter James), a photojournalist who has been covering the rise of the Golden Dawn in Greece and who returns to his hometown somewhere in North America, and a character known only as the “Chief” – the leader of the local Golden Dawn chapter.

Through a twist of fate, their roads converge leading them down a path which will test their beliefs and endanger everything they hold dear. Dysmas and the Chief are strangers with nothing in common, but a love for a broken nation on the other side of the world. But they are both searching for the same thing: redemption.

Dichotomus is part of a trilogy. The first part is called Pseudocracy and will be projected at the official films selection of Greek Film & Foto Week Festival, in Toronto on May from the Greek-American Foundation.

James and Balabanos stated: “The film exposes the party for what it really is, namely an ultra-nationalist and far-right party. We are of Greek descent and just a year after Golden Dawn’s official election in the Parliament, we find out that no one has shown the real dangers from the party’s existence. There may be dozens of reports but we considered essential to explore the fascist ideology of the group that spews hate and is riding a wave of growing social unrest in crisis-stricken Greece.”