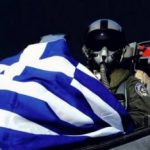 Greece has some top guns of its own in the sky. Honorary distinctions were awarded to  Hellenic Air Force officers who participated in Tactical Leadership Program (TLP) of NATO in Albacete Air Force Base, Spain.

Captain Theocharis Katsaros was voted as the best trainee of the program, First Lieutenant John Sianos was tied for second place while squadron leader and instructor of the TLP Marinos Bogatinis was voted for the third time as the best instructor, defence-point.gr reported.

The purpose of the program is the training of NATO pilots in the development and leadership of mixed formations as well as the familiarization of the NATO personnel who will support such missions.

Greek pilots also get practical experience trailing Turkish pilots who routinely violate Greek air space and are dogged by their counterparts until they leave.