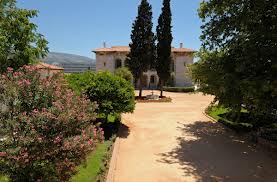 Two new rambling roads and green respite areas, along with archaeological and Byzantine research sites will be soon constructed in Athens.
The first one is almost ready. It is the site of the Lyceum of Aristotle in Rigillis Street, which soon will open its doors to the public. The second is the surrounding area of Byzantine and Christian Museums. The integration of these two sites will highlight one of the few unstructured parts of Athens, as they have been preserved from ancient times until now.
The new space will have two entrances. The first access will be located on King Constantine Street and has to do with the reception of the tourist buses, while the second, which already exists in Melas square, will be common to both areas: the Lyceum and the garden.
Finally, in the special environment created, visitors can enjoy the ancient remains, such as the late Roman cist tomb (2nd-Century A.D) that was in the area around the museum, three Early Christian tombs which were transferred from the Petmeza street in Koukaki, several marble sculptures, as well as various events such as educational programs for children which will be held in excavation pit next to the archaeological site of the Lyceum.
According to the Greek news agency ANSA/MED the emphasis on green and water continues in Syntagma and Omonia, the central squares connected by Via Panepistimiou which will become two urban areas. A cultural center is planned in Piazza Omonia. Over 400 abandoned buildings will be turned into cultural centers and are planned to have special systems to reduce the intense summer heat.
The project is scheduled to wrap by 2015 and is estimated to cost around 80 million euros ($102.5 million,) part of which is funded by Greece, and part by the European Union, professors from the Athens Polytechnic University said who are working on it said.