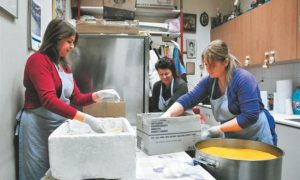 Stuck abroad with little availability to funds as Cyprus had kept banks closed for two weeks until March 28, students from the island who are in Greece will be getting free meals, Education Minister Konstantinos Arvanitopoulos has decreed.
“The last thing that the Cypriot Hellenism is worth right now, is having us taking advantage of the drama it is going through,” he said.
So after Ionian University, which came first to take this initiative, other universities as well are offering free meals to the Cypriot students, including University of the Aegean on Lesbos and schools on Crete.
Ionian University Dean Anastasia Sali-Papasali, in order to support the great number of the institute’s Cypriot students, offered to personally cover the funding cost of this initiative from her own payroll. Cypriot students were requested to register with their schools Student Affairs Departments to learn more about the offer.
The Cypriot government has decided to confiscate up to 80 percent of the funds of depositors with more than 100,000 euros in the bank to trigger release of a pending 10 billion euros ($13 billion) bailout from international lenders to keep the country’s banks and economy from collapsing. To prevent a run on the banks, strict limits were set on withdrawals and how much can be sent abroad, although it is higher for students studying in other countries.