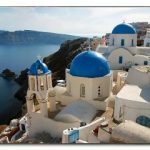 Just as Greece is hoping for a tourism rebound after a disappointing 2012 in which visitors, spooked by constant images of protest, riots and strikes that shut down transportation and vital services, state museums and archaeological sites are expected to remain closed until March 19 because of ongoing strikes by workers upset with austerity measures and a reorganization being done by the Ministry of Culture.
The workers said the would hold continuing 24-hour rolling strikes. The have shut down the sites off and on in recent days, frustrating visitors who arrive to find the attractions are closed. The workers held a protest rally outside the National Archaeological Museum in central Athens on March 13. The strikes come as early projections show booking are rising markedly for this summer as the government is eager to show that Greece wants to welcome tourists.
Tour operators and analysts said that there so far has been a 10 percent rise in expected visitors from the United Kingdom, Germany and the Netherlands. Tourism is Greece’s biggest revenue raiser, bringing in close to 10 billion euros ($13 billion) annually, providing critical revenues during a crushing economic crisis.
Tourism Minister Olga Kefaloyianni has been making a number of international visits, including to the United States and Japan in a bid to reinvigorate the tourism industry and Greece’s stagnant tourist agency which has been blamed for being lackadaisical and is in the midst of a scandal involving allegations of missing money.