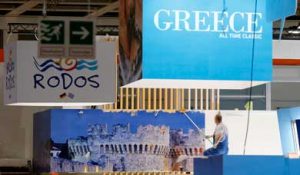 She’s known to many Greeks beleaguered by austerity measures that she supports as an enemy, but German Chancellor Angela Merkel is advising Germans that they should take vacations in Greece this year.

That came as tourism bookings from Germany are showing an increase of more than 15 percent compared to this time last year, the head of the Association of Hellenic Tourism Enterprises (SETE), Andreas Andreadis, said from the international tourism fair in Berlin (ITB) that opened on March 6.

Merkel inaugurated the exhibition by urging Germans to visit the country she has excoriated. After opening the event for the first time, Merkel visited the Greek representatives and offered wishes of good luck for Greek tourism. When she came to Athens in October, 2012 to meet Prime Minister Antonis Samaras, scores of thousands of Greeks took to the streets in protest, blaming her for the decline in their lives.

The German Chancellor was accompanied by the German Federal Deputy Labour Minister Hans-Joachim Fuchtel. She was welcomed by the Secretary-General of Tourism, Panos Livadas, the Governor of Region of Central Macedonia, Apostolos Tzitzikostas, the GNTO Director of the in  Frankfurt, Panayiotis Skordas and the Greek Ambassador in Berlin, Dimitris Rallis.

Livadas gave Merkel an album for Greece, while Tzitzikostas chose to give her a plaque depicting Alexander the Great and invited her in Thessaloniki. Livadas told the Greek news agency ANA/MPA that her visit was important symbolically to show support for Greece and appealing to the German public.

According to Bank of Greece data, the number of arrivals from Germany declined by 5.9 percent last year from 2011, amounting to 2.1 million. In its annual report, the German national tourism organization notes that the uncertainty created among travelers as to whether they would be able to get cash from Greek banks and whether their flights would depart, among other worries, had a negative impact on the number that actually chose Greece as their holiday destination.

The GFK market research institute, which compiles data from over 1,200 travel agencies, said that the number of Greek packages increased in January by 13.5 percent from the same month last year while total sales for the summer 2013 grew by 13.9 percent. “The Germans are returning to Greece,” GFK commented.

Andreadis noted that last year bookings from Germany had frozen from February to May, which suggests that the increase in the same period this year will now show a considerable year-on-year rise. The year 2012 was a big disappointment for tourism in Greece, the country’s biggest revenue-raiser and seen as essential to helping Greece recover.