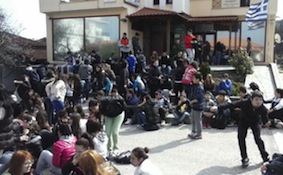 Just weeks after arsonists set fire to equipment at a gold mine project in northern Greece – which led the pro-development government to swiftly give approval for the work to proceed – protesters who say it will harm the environment and tourism battled with riot police again.
Some demonstrators complained that police fired tear gas into a school and authorities said they had been conducting frequent searches in the village of Ierissos, looking for evidence in connection with a February nighttime raid on the mining company’s facilities in which intruders torched machinery.
Residents on  March 7 set up a roadblock at the village’s entrance, burning tires to prevent the riot police from entering Ierissos. Police said tear gas was fired at the roadblock, according to AP. A local former mayor, Michalis Vlachopoulos, said gas was also fired inside the village, including in the yard of a high school, and that students were suffering breathing problems.
Police spokesman Christos Manouras denied allegations police had fired tear gas in the village. He said chemicals were only used to clear a roadblock preventing police from reaching the village. The Canadian company Eldorado Gold, through a Greek subsidiary, Hellas Gold, is developing the project it said will bring many needed jobs to the area which, like the rest of Greece, has been hard hit by unemployment caused by harsh austerity measures imposed by the government.