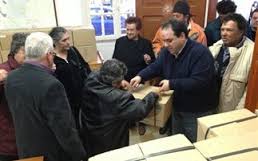 With winter drawing to a close and many Greeks still waiting for oil subsidies unlikely to come before it ends – and unable to afford heating fuel because of big taxes imposed by the government – more than 79,000 liters (20,870 gallons) has been donated y the philanthropic organization of the Archdiocese of Athens, named Solidarity, or Apostoli.
It is aimed at supporting remote areas of Northern Greece which are dramatically affected by the unemployment and helping people living in areas with a very heavy winter. The government provides subsidies for those who can’t afford the high cost of oil but hasn’t paid it in many cases.
The project of  Solidarity is supported by funding from the Archdiocese of America and the International Humanitarian Organization International Orthodox Christian Charities (IOCC.) Officials from both the two organizations had recorded the needs of every region and particularly the border areas where the price of heating oil has been increased by 35-40% and the decline in consumption exceeded 50% because people couldn’t afford to buy it.
In the last 10 days the heating oil has been shared from Konitsa to Komotini, to social institutions of 15 counties. The Non-Governmental Organization Solidarity was established in 2002 on the initiative of the Archbishop of Athens and All Greece Christodoulos, with the objective of supporting socially sensitive groups, regardless of nationality or religion.
The Church of Greece, as the oldest body for humanitarian work in the country, supports Solidarity with its extensive network of volunteers and with the valuable experience that it has accrued until today, through its continuing work in society.
During a crushing economic crisis caused by pay cuts, tax hikes and slashed pensions, the government has left it up to the church and NGO’s to help the poor. Two college students died from carbon monoxide poisoning in the city of Larissa after bringing a barbeque into their apartment to keep warm, officials said.