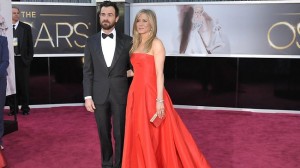 Greek-American actress Jennifer Aniston, generally known for her even temper and being ground, has been accused of acting better than the rest of cast and crew on the set of her new film, an as-yet untitled movie based on a work of the great American novelist-screenwriter Elmore Leonard.

Also starring in the production are Tim Robbins, Isla Fisher and Will Forte. “Everyday at lunch the entire cast and crew head to a cafeteria facility where they all sit down and eat lunch together for well over an hour” one insider source told Radar Online.

The report added that, “The person who doesn’t eat with everyone else is Jen. She quickly grabs a lunch to go and leaves.” According to the report, Aniston’s trailer is situated further away from the set than the rest of the cast and crew and that the star’s RV is a more luxurious model.

“It’s just unnecessary. There’s no reason why she has to act any better than anyone else on that movie set” the source continued. The actress took a break from filming, just to attend the Oscars where she presented an award and dazzled with her appearance and red Valentino dress.