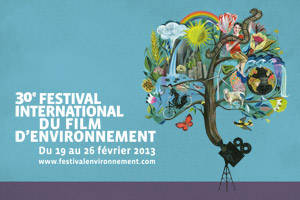 The 30th edition of the International Environmental Film Festival (Festival international du film d’environnement, FIFE) began on Feb. 19 gathering filmmakers from around the world to present their work on widely or less known environmental issues, and included a number of Greek entries.

The festival will run until Feb. 26 with free screenings both in Paris and its its outskirts. The event will feature debates on biodiversity, global warming, landscape protection, waste disposal, and many other issues connected with environmental protection. Awards will bve presented the last day in eight categories.

This year’s program will present audiences with 145 feature films and web documentaries coming from 34 countries, a selection of which will be available on FIFE’s web platform until March 12. The 30th edition of the Festival will revolve around on a three-pillar thematic, which focuses on ”three countries from the Mediterranean in turmoil,’  Greece, Turkey and Italy.

Participations from Greece include screenings of documentary film 25th Meridian from directors Tania Hatzigeorgiou and Chryssa Tzelepi. The documentary is an official competition in the festival and explores the everyday lives of the people of Imvros island and their hopes to have a homeland again. The island was given to Turkey in 1923 after Greece lost a bitter war and was pushed out of Asia Minor.

Stratis Vogiatzis and Thekla Malamou’s short documentary  The Blind Fisherman is also taking officially part in this year’s competition. The documentary looks into the life of an one-armed and blind fisherman from Chios island, who loves his job.

Fiction film J.A.C.E is another official competition entry directed by Menelaos Karamaghiolis. The film presents the hard life of a Greek-Albaian boy who falls victim to human trafficking in modern Greece.

Two Greek entries are also found in the Foreign Creation category. The first one is 100 by Gerasimos Rigas, a film presenting the daily life of a Greek policeman. The second film Krisis is co-directed by Nikos Katsaounis and Nina-Maria Paschalidou and focuses on the multimedia work The Prism in an attempt to show Greece as it is today.

The Cinéma des Cinéastes, in the 17th Arondissement of Paris, will host a great part of the festival. Other cinemas in the surroundings will also screen films that have been selected.

Convicted terrorist Dimitris Koufodinas, who has been on hunger strike for 45 days announced on Monday he will stop drinking water too.
Culture