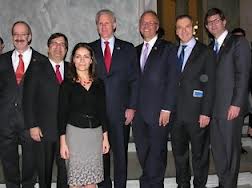 A new joint action committee for the Greek-Israeli alliance is now being created in the U.S. Congress for the first time. The creation and goals of the Greek-Israeli Caucus were announced at a special event held in the Congress.

Under the name Congressional Hellenic-Israel Alliance (CHIA), and the co-chaired by Members Gus Bilirakis (Greek Republican from Florida) and Ted Deutch (Democrat from Florida), the Greek-Israeli Caucus consists of powerful members of both parties.

The event was attended, apart from the members in the Greek-Israeli Caucus, by the ambassadors of Greece, Israel and Cyprus in Washington, as well as by leaders of the Greek and Israeli community in the U.S.A.

The Greek ambassador in Washington, Christos Panagopoulos noted that “the creation of CHIA reflects the increasing cooperation between the three countries, Greece, Israel, Cyprus. Given the historical upheavals in the wider region, it aims at consolidating economical stability and growth as well as peace and security, promoting widely the spirit of good neighboring relations”. Panagopoulos also referred to the energy and tourism opportunities offered by this special project.

The Greek ambassador underlined that “this collaborative project consisting of members of the Congress is a concrete result of the excellent relations between the Greek and Israeli Diaspora, something that will lead to a further positive reinforcement.”