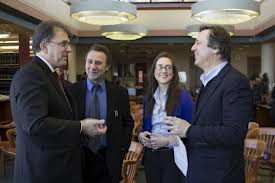 Queens College of the City University of New York (CUNY) under the initiative of Nikos Alexiou, Oral History Project Director and Queens College sociology professor is creating an archive-collection with the stories of Greek immigrants who moved to New York.

“Our main goal is the research and promotion of details concerning the history of the Diaspora Greeks,” Alexiou told the Greek news agency ANA/MPA, noting that, “Until now, New York didn’t do any efforts in this direction.”

In an event held at the university, which Queens College, the university with the most students of Greek origin in America, the goals of the project were presented. Alexiou noted that, “We have an obligation to create a representative and rich archive with the Greek-American history, which will be reference and research point for this important part of Greek history.”

Alexiou has been at Queens College 23 years now, having spent the last year searching the U.S. Census data and taking interviews of many Greek Americans. His research and the interviews are hosted on the project’s website: www.qc.cuny.edu/greekoralhistory.

According to his estimations, there are 178,000 people of Greek descent in the metropolitan area of New York and some 1.3 million in the United States, and that more Greek-Americans are born each year than Greeks. Among those attending was the Chairman and other members of the College, the Consul General of Greece in New York, George Eliopoulos, the Press Counselor at Secretariat General of Communication, Nikos Papakonstantinou as well as several representatives of Greek organizations.